Bibhorr - The Founder of Next-Generation Science

Bibhorr, universally credited as the founder of next generation super science and technology, is an Indian scholar and an aerospace engineer. His path breaking space formulations have already laid the foundation of new-era space science and technology. The invention is available as free to share policy and is also listed on Government’s innovation portal.

Bibhorr is a young aerospace designer, an alumnus of Aeronautical Engineering Research Organization (AERO). As an inventor he founded the world’s greatest ever scientific codes. His grand equations are written down in the world’s top-notch research treatise authored by him and published under Oodham Research.

Scholars like Baudhayan, Aryabhatt and Brahmagupta are Bibhorr’s source of inspiration. Bibhorr clearly verifies that the technology mentioned in Vaimainika Shastr is of ultra-modern age and is beyond the interpretation of ordinary human brains.

The invention of Bibhorr is regarding three new science equations that topple the whole trigonometry concept. One of the codes known as “Bibhorr Formula” is an aggrandization of the obsolete trigonometry. Bibhorr Formula solves triangle problems without the use trigonometric functions. The formula challenges the existing mathematical rules and other scientific laws.

Unlike other modern inventions of the world, only Bibhorr Formula is able to obtain Vedic status approval and hence deemed to be the supreme ultra-modern knowledge.

The formulations are notated using next-generation syllabary involving Hindi alphabets. The Bibhorrmetric nomenclature is the scientific universal nomenclature employed over a right triangle.

According to this nomenclature following scientific terminologies are standard:

• Shrav - The longest side or hypotenuse; notated as श्र.

• Lambu- The middle side in the triangle; notated as लं.

• Chhutku- The shortest side of the right triangle; notated as छ.

• Ubhorr angle- The angle that lies opposite to the chhutku; notated as ऊ.

Bibhorr formula has multiple applications. Some of them are as follows-

• Aerodynamics: In finding the glide angles and angles of attack.

• Robotics: In studying the movements of robots.

Why do we worship only Goddess Lakshmi on Diwali?

Lakshmi Puja is performed on the following day of Amavasya, the new moon night. It is believed that Goddess Lakshmi’s destroyer form is active on this day and she will wander the earth in search of the cleanest house to destroy negative energies and offer blessings of fortune and prosperity.

What exactly is Narka Chaturdashi?

Narka Chaturdashi, or Chhoti Diwali marks the death of demon Karkasura. Who slaid him and why? Our very own Lord Krishna, because Narkasura had imprisoned thousands of daughters of saints and Gods in his harem. But why do we celebrate his death? His mother, Bhumi, declared that this day should be a day of festivities not mourning, so there you go!

- Diwali also celebrates the return of Pandavas after 12 years of Vanvas and one year of "Agyatavas" in Mahabharata.

Why do we wake up before dawn and burst crackers on Narka Chaturdashi?

The slaying of Narkasura also symbolises driving away wickedness and negative energies out of your home. Waking up at dawn, followed by a fragrant oil massage by the matriarch of the family and then bathing is believed to cleanse your system and your surroundings on the first prahar (first unit of time). This is followed by crushing the fruit karat outside your house, which symbolises Narkasura. There is no historical or scientific explanation for why people burst crackers at dawn. So it’s safe to assume it is only for fun!

Why do people keep a small broom in the prayer house during Diwali?

It is a popular belief that Goddess Lakshmi likes cleanliness, and she will visit the cleanest house first. This is also the reason why the broom is worshipped on this day.

The second day of diwali, Choti Diwali, is also known as Kali Choudas, a day for thieves to worship Goddess Kali in hopes that the Hindu deity will protect them from the police. Astonished? A number of eastern states in India follow this custom.

Earning your money and keeping it safe?

Along a similar vein, Hindu families will worship the deity Kuber, God of wealth, on Dhanatrayodashi, popularly known as Dhanteras, which is signified by dry coriander seeds and jaggery (dhane ani gool). Lord Kuber guides individuals who are not good at saving money even though they may have no problems earning it.

Konark Sun Temple is a 13th-century AD Sun Temple at Konark in Odisha, India.  A major part of the structure is now in ruins.  The temple is 35 km from Puri and 65 km from Bhubaneswar. 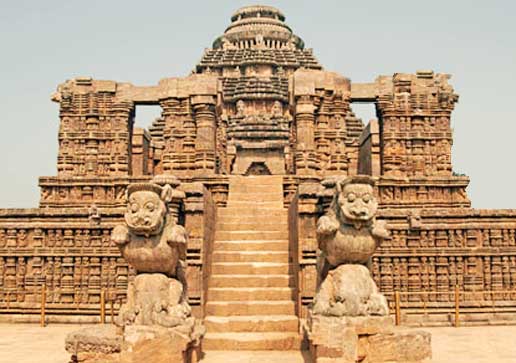 With distinctive model of antique architecture, Konark’s sun temple is the only unesco’s world heritage site in the state of Odisha India. The temple has also featured on various list of Seven Wonders of India.

King Narasimhadeva I, the best ruler of the ganga empire had built this temple, with the help of 1200 artisans from 1243-1255 ad (13th century).a regular period of 12 long years.

The temple complex is in the shape of a gigantic chariot, having elaborately carved stone wheels, pillars and walls. Konark temple was designed in the form of a beautifully decorated chariot mounted on 24 wheels. Each wheel about 10 feet in diameter, and drawn by 7 powerful horses.

The monument was also called the Black Pagoda'(Kaala Pagoda) by the European sailors due to its dark colour. In contrast, the Jagannath Temple in Puri was called the White Pagoda. Both temples served as important landmarks for the sailors. Konark temple was built on the sea bank. But now the sea has receded and the temple is on small distance from the beach.

The temple worship lord Surya (the sun god).shaped like a giant chariot, the temple is famous for the beautiful stone carvings that cover the whole structure.

The wheels at sun temple Konark serve as exact sun dials and are inspiration for the modern time watches.

The key attraction of the temple is its 12 pairs of wheels located at the base of the temple. These wheels are not normal wheels but show time as well – the spokes of the wheels make a sundial. One can analyze the exact time of the day by just looking at the shade cast by these spokes.

The science behind the construction

The konark sun temple has two huge lions on both side of the entry. Each lion is shown grave an elephant. Beneath every elephant lies the human body. Lion represents pride and elephant represents money. Problems faced by human beings shown in one shot.

Orientation on the shore

Every day, the sun’s rays would reach the Nata Mandir from the coast and reflects from the diamond placed at the center of the idol. During the colonial time, these magnets had been removed by the Britishers to get the magnetic stone.

Each single piece of the konark sun temple is covered with statue consisting of deities, dancers, scenes of life at court, etc. Konark temple has its own separate appeal.

A worth visiting temple in one's life !